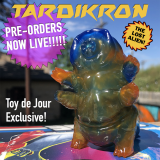 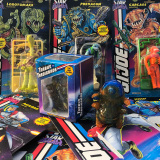 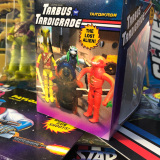 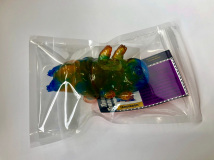 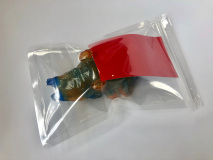 We are SUPER EXCITED to announce the release of our own exclusive color for DoomCo Designs' Tarbus the Tardigrade known throughout the Lunatriks Empire as 'Tardikron - The Intergalactic Pirate'.

The figure itself is a translucent blue and orange swirl, and again, this color is exclusive to Toy de Jour. If you're somehow unfamiliar with DoomCo Designs' Tarbus then you should know that it's the world's FIRST product/toy designed entirely in VR. (Whaaaat!?)

Our version just so happens to be the Lost Alien - 'Tardikron', last seen in action battling a Brigade of Star Fighters sometime around 1994. The exclusive packaging we're finishing up will fit in perfectly with your other aliens from the same galaxy.

Pre-orders are available now with two options - full retail package for $25 or 'Mail-Away' (bagged with a red-back filecard) for $20. There are very limited numbers of both so be sure to grab one now so you don't miss out.

We're looking to start shipping the same week on the mail-away versions and the following week on the ones in package.

Sold out
Add to Cart
Click here for our Privacy Policy
All stuff on this site is copyright Toy de Jour 2022. WE LIVE IN THE FUTURE!!!